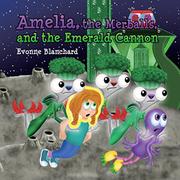 AMELIA, THE MERBALLS AND THE EMERALD CANNON

“Adventure, inventiveness, and humor merge in this quirky, appealing tale.”

A space-traveling girl continues gathering items to help save her alien friend’s sister in this third series outing.

In two previous children’s books, 8-year-old Amelia, a white girl with reddish hair, agreed to help Uglesnoo, a three-armed purple alien from Pluto, cure his ailing sister. A repelling crystal from Neptune will heal her, but that planet’s Queen Neep will barter it only in exchange for a long list of objects from around the solar system. Some the duo has already collected, like five boxes of dandelions from Earth. Next on the list: five pairs of flying shoes from Mercury, inhabited by Merballs. Hostile Venutons of Venus, the twosome’s last stop, try to prevent Amelia and Uglesnoo from trading with the Merballs (“Do not keep these criminals. Bring us the prisoners”). But the Merballs are basically friendly and don’t want trouble. They have problems of their own: They are suffering from asteroid strikes that create a sickening fog of dust, hospitalizing many. After another asteroid hit, Amelia and Uglesnoo come under suspicion and are briefly imprisoned. They fall into an old iron mine, from which they escape. Amelia develops a cunning plan to smash the asteroids with a cannon of her design, using raw materials from the mine. If she’s successful and a grateful Empress Ping rewards them with flying shoes, they’ll be one step closer to curing Uglesnoo’s sister—and maybe Amelia will have a chance to try out Mercury’s inviting slide transportation system.

Blanchard (Amelia, the Venutons and the Golden Cage, 2016, etc.) writes a fast-paced tale with a young heroine who’s a quick thinker. Designing and crafting the cannon shows Amelia’s ingenuity and reflects the current interest in maker culture. There’s also plenty of silly fun, such as the green slime floor in the prison cell that almost engulfs Amelia and Uglesnoo, as well as cool tech, like the Plutonian’s multifunctional bed, which plays a role in their escape.

Palmisano’s (An Amazing Circus of Phonograms, 2017) illustrations are colorful and three-dimensional, the mix of Earth and alien characters having a family resemblance in their googly eyes.

Adventure, inventiveness, and humor merge in this quirky, appealing tale.

I Heart Reading Book Review and Giveaway Amelia, The Merballs And The Emerald Cannon

“With aliens, different planets, a good dose of humor and excellent storytelling that is age-appropriate, this is one of the best kids series out there. The illustrations are pretty fun too and fit the story well.” I Heart Reading.

I previously read and reviewed Amelia, the Venutons and the Golden Cage, book two in the series, and really enjoyed it. So, when I had the opportunity to read book three, Amelia, the Merballs and the Emerald Cannon, of course I couldn’t say no.

With the second book, I was amazed by how creative the author was, and I have to say, this third book is even more original, fun and creative!

In this book, Amelia and Uglesnoo land on Mercury where they meet the Merballs. All seems to go pretty well, until an asteroid hits Mercury, and the Merballs areconvinced Amelia and Uglesnoo are somehow involved. With aliens, different planets, a good dose of humor and excellent storytelling that is age-appropriate, this is one of the best kids series out there. The illustrations are pretty fun too and fit the story well.

A lively sequel offers a sure-handed blend of fantasy, humor, adventure, and an ingenious heroine.
BOOK REVIEW
In this second installment of a space-travel fantasy series for young readers, a little girl and her purple alien pal visit Venus.
At the end of the first book in Amelia’s Amazing Space Adventures chapter-book series, the 8-year-old title character returns from a trip to the moon with her new friend Uglesnoo, a three-armed visitor from Pluto. The two are working their way through the solar system (one planet per volume, it seems) to locate items necessary to save Uglesnoo’s sister from an “endless sleep” and to find an antidote for the rafter-raising snores of Amelia’s sibling. Next stop: Venus, to collect “20 Bliss Bubbles” in exchange for 10 boxes of “Moo-Bon” candy, acquired from the Moochin moon dwellers as a reward for helping them reclaim their underwater Sapphire Palace. Venus is home to catlike “Venutons,” who breathe out silver “bliss bubbles” while sleeping. (These can be cut and knotted at the ends like balloons. The deeper the sleep, the larger the bubbles.) Awakened, the Venutons make it clear that bliss bubble collectors are not welcome. After betrayal by cave-dwelling rabbit creatures, imprisonment in a rolling golden cage shaped like a giant ball of yarn, and a tussle aboard Uglesnoo’s spaceship with one last vengeful Venuton, the pair escapes thanks to Amelia’s quick thinking. Dispensing with the realities of planetary science, Blanchard (Amelia, the Moochins and the Sapphire Palace, 2014) has fun with her imaginary solar system and its inhabitants. Readers should, too. But as wacky as things get (chocolate rain from an “Interspecies Feeder”), Blanchard also delivers thoughtful balance (“The stars scattered like spilled sugar in the inky darkness”). She grounds her plot, too, in Amelia’s relatable moments of uncertainty and her ability to use her head to solve dilemmas as well as in helpful reminders of the escapade’s central purpose: curing Uglesnoo’s sister. Motz’s full-bleed, cartoon-style illustrations, mixed with variously colored text-only pages, reflect the book’s offbeat appeal.
A lively sequel offers a sure-handed blend of fantasy, humor, adventure, and an ingenious heroine.
EXCERPTING POLICIES
Please review Kirkus Media’s excerpting policies before publishing any portion of this review online or in print for any use. To learn about proper attribution and to ensure your use is in compliance with our guidelines, we invite you to visit http://www.kirkusreviews.com/indieexcerpts.
Kirkus Indie, Kirkus Media LLC, 6411 Burleson Rd., Austin, TX 78744 indie@kirkusreviews.com

Amelia, the Venutons and the Golden Cage is a wonderful children’s book that will allow your kids to get your kids started the Sci-Fi genre. The illustrations are of an average quality, although, vibrant colors did get my kids very excited. For a Children’s book, the number of pictures in the book are on the low side. It did, however, allowed my kids to use their imagination to play out the scenes in the story, which is preferable. The story is intriguing and well thought out. All in all, the author did a great job of creating an engaging story that kept my kids interested. We are definitely looking forward to the next book!

Uglesnoo needs Amelia’s help. His sister is very sick. The only cure is a repelling crystal from Neptune. With his Earthling friend, Amelia, they must continue their quest. More items are needed to buy the crystal. But Venus is full of danger and angry aliens. Are Uglesnoo and Amelia in over their heads?

KIRKUS REVIEWS – Amelia, the Moochins and the Sapphire Palace by Evonne Blanchard 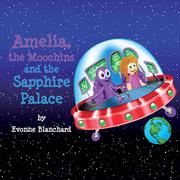 AMELIA, THE MOOCHINS AND THE SAPPHIRE PALACE

AMELIA, THE MOOCHINS AND THE SAPPHIRE PALACE

by Evonne Blanchard, illustrated by MikeMotz.com

“Appealing illustrations combine with lots of text to make this a great read for children transitioning from picture books to chapter books.”