Name:   Uranus was discovered by the British astronomer William Herschel in 1871.  At the time King George III was on the throne in England.  The astronomer wanted to name the planet George, in honor of his king.  This idea proved unpopular with astronomers from other countries.  Instead they decided to call it after the ancient Greek God of the Sky, Ouranos, (Uranus is another spelling of the same name).  It is the only planet named after a Greek, rather than a Roman God.

Fun Uranus Facts:  What’s one weird thing about Uranus?    It’s the only planet to spin on its side!  Most planets are like a spinning top when pressed down.  That’s how they rotate.  But imagine tipping that top over and spinning its middle.  That’s how Uranus rolls!

Uranus is another gas planet.  Hydrogen and helium are the main gases.  Scientists believe it has an icy-rather than rocky core-made up of water, methane and ammonia.

You have to use a telescope to see Uranus.  When you look at it, you’ll see it has a blue –green light.  Sunlight reflects from Uranus’s clouds, which lie beneath a layer of methane gas.  This gives Uranus its distinctive color.

And then there’s Uranus’s funny name.  The only planet that makes school children giggle the world over.  However-according to NASA-it’s actually pronounced YOOR-un-us.  At least that’s the only way they say it…without blushing!

Evonne Blanchard is the author of, Amelia, the Moochins and the Sapphire Palace,  Amelia, the Venutons and the Golden Cage and Amelia, the Merballs and the Emerald Cannon.  These are the first three books in Amelia’s Amazing Space Adventures.  The author is currently working on the fourth book in the series, Amelia, the Snapperjacks and the Molten Maze. 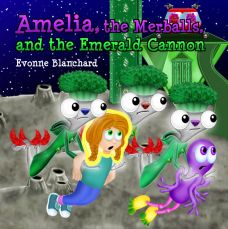 Amelia and Uglesnoo land on Mercury.  They meet the Merballs, the friendly aliens that live there.  All goes well until an asteroid hits their planet.  Amelia and Uglesnoo find themselves in deep trouble.  How will they convince the Merballs
of their innocence?  And how will they manage to collect the flying shoes, escape Mercury and continue their quest to save Uglesnoo’s sister? 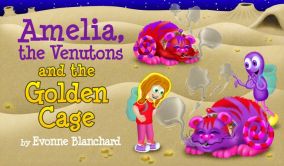