Pisces Characteristics:  Pisces represents those born from February 19—March 20.  Despite being near the beginning of our calendar year – in astrological terms – it is the 12th  and final sign of the Zodiac.

Bad Things about Pisces: Fearful, naïve, gullible, sad…likes to escape into a fantasy world.  So there’s a bit of the dungeons and dragons’ nerd about you fishes!

Myth and Legend: So what do the two fish represent?  Some ancient God’s pets?  No, the myth of Pisces begins with a monster, a particularly terrible monster named Typhoeus.  The father of all monsters, he was a fire breathing dragon that never slept and had over a hundred heads.  Sounds cute eh?  Side note, he later married another monster and had lots of baby monsters such as the Sphinx, the Nemean Lion and that ultimate lapdog Cerberus, the three headed dog of the underworld!

One day Typhoeus appeared and decided to get rid of all the Olympian Gods. They all fled in terror from him.  The Greek Goddess of love and beauty, Aphrodite, (Venus in Roman mythology) was sitting with her son Eros, (Cupid in Roman mythology) on the banks of the river Euphrates, when Typhoeus ran at them.  To escape the monster, they changed themselves into fish and swam away in the river.  In order not to lose one another, they tied their fins together with cord.

Athena, the Greek Goddess of wisdom and knowledge, (Minerva in Roman mythology) commemorated their escape by placing them in the sky as the Pisces constellation.

Element Sign: Water.  Unlike silly Aries, Pisces element sign makes sense. It’s water, so the whole fish, water thing goes nicely together.  Water signs (Scorpio, Pisces and Cancer) are supposed to be very emotional, sensitive and generally all over the place, sort of like water!

Glyph:  I know what you’re thinking? What does this glyph even represent?  It looks like a Chinese character more than a fish right?  But it’s actually an ancient symbol that represents the mouth of a fish.  Yes, it’s a stretch but then so is the Pisces constellation which looks more like a three year old writing its’ first letter V, rather than two co-joined fish.

Constellation:  Pisces is a difficult constellation to spot, due to its’ large size and dim looking stars.  Dim as in light not as in brains! Constellations don’t have brains, as far as I know! It can be best seen in the northern hemisphere between November 6th and November 9th  at 9pm (between latitudes 90 degrees and minus 65 degrees).  In the southern hemisphere, look for the Pisces constellation in mid-spring.   Use a star map as a guide. As always a knowledgeable person with you, to help find the constellation can be very helpful! 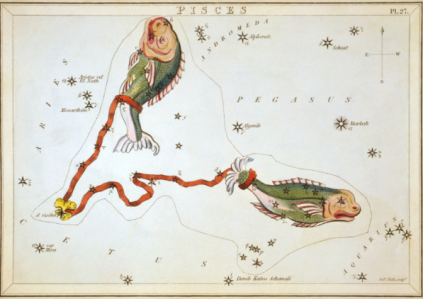 Extra Fun Fact: Did you know that the Pisces constellation has twenty one main stars?  Overall it is the 14th largest constellation.

Next Post.  Curious about the Star-Sign Aries, the Ram (March 21-April 19)?  The Story of Aries and How to spot this Constellation in the Night Sky.

Ever wondered if aliens exist? What if one needed your help? Would you travel to outer space?  For the adventures of a lifetime…

New  Amelia, the Venutons and the Golden Cage:  Book Two

Amelia, the Moochins and the Sapphire Palace:  Book One

When is a present not a present?  When it’s a friendly purple alien called Uglesnoo, from Pluto!  Uglesnoo needs to leave right away for the Moon.  Uglesnoo also desperately needs Amelia’s help.  Should Amelia venture into outer Space?