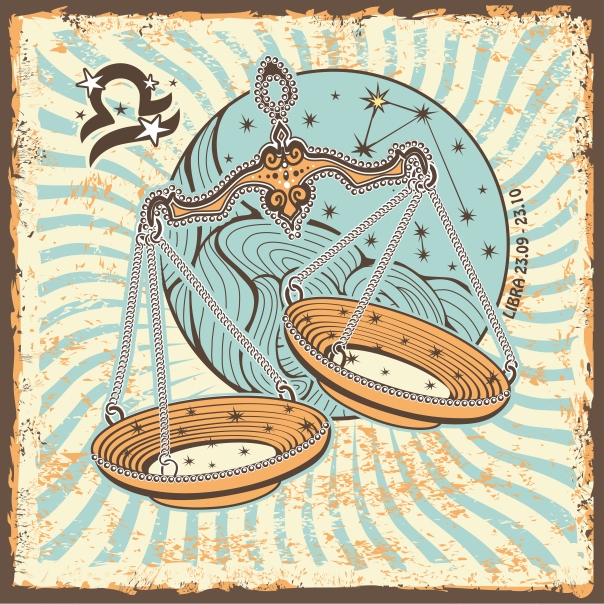 Libra represents those born from September 23—October 22.   Libra is the seventh Zodiac sign of the year, right after Virgo.

Myth and Legend:  Way back in ancient times, the Libra constellation was known as the claws… of the scorpion!  But that dramatic description fell out of favor and the constellation over time became known as simply, ‘The Scales,’ meaning justice, balance and harmony.  It’s related to the Virgo constellation.  Virgo is shown as a beautiful young woman —and often the Goddess Astraea— who carries the scales of justice in her hands:  Those scales are the Libra constellation.   Libra is also visible in the Autumn/Fall equinox, when the days and nights are of equal length and so in balance.

Do we think this collection of stars actually looks like a pair of scales? The top maybe? Although you have to imagine the weighing scales at the bottom.  Personally, I think it most resembles an unfinished tetrahedron, but where’s the myth in a geometric shape?

Libra is not a dramatic constellation.  If you can find the nearby bright stars of Spica and Antares, you can then see the fainter stars in Libra.  The most visible star in Libra is the crazily named Zubeneschamail, Beta Librae!  Then there is Apha Librae and Gamma Librae.  These three stars make up the upper part of the scale.

Extra Fun Fact: Libra means “the weighing scales” in Latin.  The scales are held by the Roman Goddess, Astraea (Dike in Greek Mythology).

Next Post—Curious about Scorpio, (October 23 – November 21). The Story of Scorpio and How to spot this Constellation in the Night Sky.