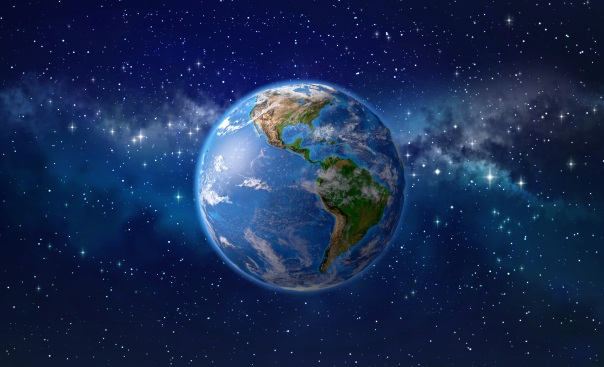 Name:   Earth is the only planet not named after a Greek or Roman God or Goddess.  Instead the name simply means the soil beneath us.  It is thought that the word came from both the English and German words, ‘eor(th)e/ertha’ and ‘erde’, which means ground. But who named our planet in the first place?  No-one knows…it remains an earthly mystery!

Fun Facts About Earth:
What’s the most amazing thing about our beautiful planet?  The answer to that is easy…it’s the only planet with life on it  And not just in our solar system.  As far as we know it’s the only living planet in our vast universe. But what makes earth even more special is the huge diversity and variety of all the life upon it.

Why do we even have life on Earth? Well our planet has a number of unique features.  The most important is thought to be Earth’s large amounts of water and in just the right amount.   Not too much that it covers everything, but not too little that it becomes a desert, like Mars and Venus, (the closest planets to earth).

Our plate tectonics – the movements of the Earth’s crust- are also thought to be important. Scientists believe they created our mountain ranges and deep oceans.  They also keep our oceans at an even temperature, helping life to flourish.

But why is Earth sometimes called the Goldilocks planet?  Well if you remember the ‘just right’ part of the Goldilocks story, Earth is as choosy as that little blonde girl.  She picked just the right distance from the Sun to have the perfect heat for life to begin and evolve.  Another perfect thing about Earth is its size.  If she was smaller, we wouldn’t be able to hold onto our atmosphere, any larger and she would be too hot for life.

Our moon is also thought to play a role in life on Earth.  She pulls the ocean’s tides and life is thought to have evolved from the oceans.

So are we really alone in this enormous universe? Or might there might be other Earth-like planets harboring aliens like Uglesnoo, the cute friendly alien in my childrens’ books?  Well as you can see from reading this blog, it takes a lot of special features to create a Goldilocks planet.  However the universe is so huge that  scientists believe there should be many planets out there, just like ours.  And where there is another Earth-like planet, there might be life.  Maybe one day…Goldilocks will find her twin.

Earth is also where my story begins in book one of Amelia’s Amazing Space Adventures, Amelia, the Moochins and the Sapphire Palace.  Amelia receives a gift for her birthday.  The present turns out not to be a present at all, but a fun friendly alien called Uglesnoo from Pluto.  Uglesnoo desperately needs Amelia’s help.  Should she venture into outer space?

Evonne Blanchard is the author of, Amelia, the Moochins and the Sapphire Palace, Amelia, the Venutons and the Golden Cage and Amelia, the Merballs and the Emerald Cannon. These are the first three books in, Amelia’s Amazing Space Adventures, an exciting series of ten books set in outer space (for children ages 6-10).

Amelia and Uglesnoo land on Mercury.  They meet the Merballs, the friendly aliens that live there.  All goes well until an asteroid hits their planet.  Amelia and Uglesnoo find themselves in deep trouble.  How will they convince the Merballs of their innocence?  And how will they manage to collect the flying shoes, escape Mercury and continue their quest to save Uglesnoo’s sister?