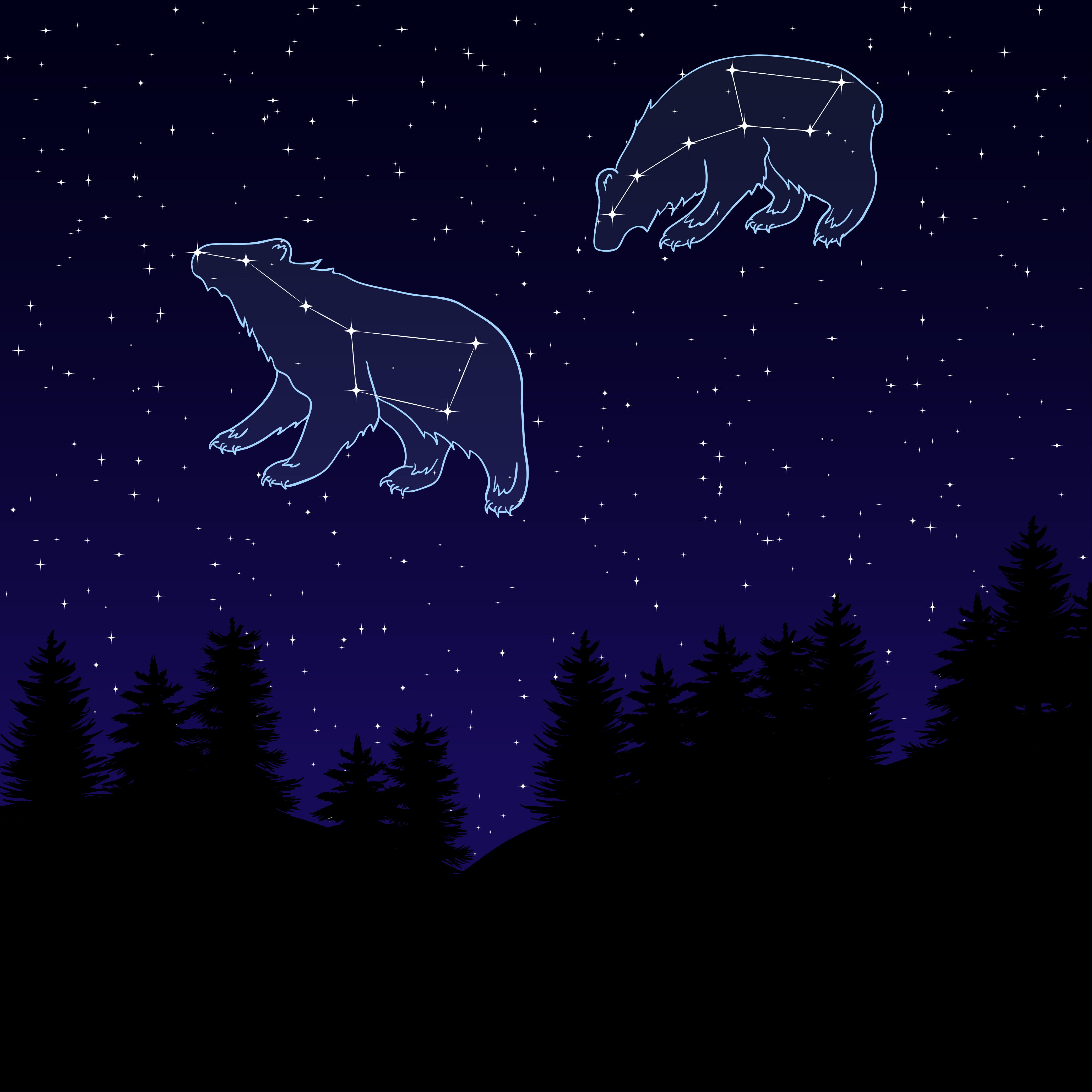 Now you’ve all heard of the famous Big Dipper and Little Dipper.  I’m sure you also know about the Big Bear and Little Bear constellations or to use their latin terms, Ursa Major and Ursa Minor.

But did you know that the the group of stars commonly known as the Big Dipper and Ursa Major are actually the same thing?  And that the stars that make up the Little Dipper are also a part of the Ursa Minor constellation?

But how did the Big Bear and Little Bear constellations get their names? Well every civilization has a different story, but what’s unusual about these constellations is that a lot of diverse cultures all decided that these two particular constellations looked like bears.

Native Indians in both Canada and the USA identify these constellations as bears, as well as the more familiar story from Greek and Roman mythology.  Native Indian stories  tell of a dramatic bear hunt led by a fearless warrior across the night sky.

The ancient Greeks and Romans – as usual- have an even more elaborate story to explain these bear-like constellations.

Callisto, a beautiful young woman was out hunting in the forest.  She became tired and decided to take a nap. Whilst she was sleeping, she caught the eye of the god Jupiter (Zeus in Greek Mythology).  Jupiter’s wife, Juno, (Hera in Greek Mythology) became extremely jealous of Callisto, because being jealous is Juno (Hera’s) main hobby.  Yes, she desperately needs to get another hobby.  Anything will do! Later, Juno found out that Callisto had given birth to a son. She believed that Jupiter (Zeus) was the father of her son. Driven mad by jealousy Juno, (Hera) transformed Callisto into a bear, so she would no longer be pretty. Callisto’s son was named Arcas.  He ended up being adopted and also grew up to be a hunter.  During this time Callisto still lived in the forest as a bear. One day Callisto-the- bear strolling through the forest caught sight of her long-lost son Arcas.  She was so excited to see him that she ran up to him, forgetting she was a bear. Arcas thought the bear was about to attack him and and shot an arrow at Callisto-the-bear, his actual mother.  Fortunately from up high in Olympia, Jupiter (Zeus) saw the arrow and prevented it from killing Callisto. To save Callisto and Arcas from further torment from Juno (Hera), Jupiter (Zeus) decided to change Arcas into a bear as well.   Then he grabbed both bears by their  tails, and flung them up in the night sky as the Big Bear and Little Bear constellations and there they stay, immortalized for all time.

The best time to view both these constellations is in early Spring, at around 9pm, (latitudes +90 degrees and -30 degrees).  You can either use a sky chart (downloadable on the internet) or an app.  My favorite stargazing app is the Sky Safari app.  It’s an excellent  tool for quickly identifying the constellations as they rotate through the celestial heavens!

Evonne Blanchard is the author of, Amelia, the Moochins and the Sapphire Palace,  ‘Amelia, the Venutons and the Golden Cage and Amelia, the Merballs and the Emerald Cannon.  These are the first three books in Amelia’s Amazing Space Adventures.  The author is currently working on the fourth book in the series, Amelia, the Snapperjacks and the Molten Maze.

Amelia and Uglesnoo land on Mercury.  They meet the Merballs, the friendly aliens that live there.  All goes well until an asteroid hits their planet.  Amelia and Uglesnoo find themselves in deep trouble.  How will they convince the Merballs of their innocence? And how will they manage to collect the flying shoes, escape Mercury and continue their quest to save Uglesnoo’s sister?

“…This third book is even more original, fun and creative! With aliens, different planets, a good dose of humor and excellent storytelling that is age-appropriate, this is one of the best kids series out there. The illustrations are pretty fun too and fit the story well.”

When is a present not a present?  When it’s a friendly purple alien called Uglesnoo, from Pluto!  Uglesnoo needs to leave right away for the Moon.  Uglesnoo also desperately needs Amelia’s help.  Should Amelia venture into outer Space?