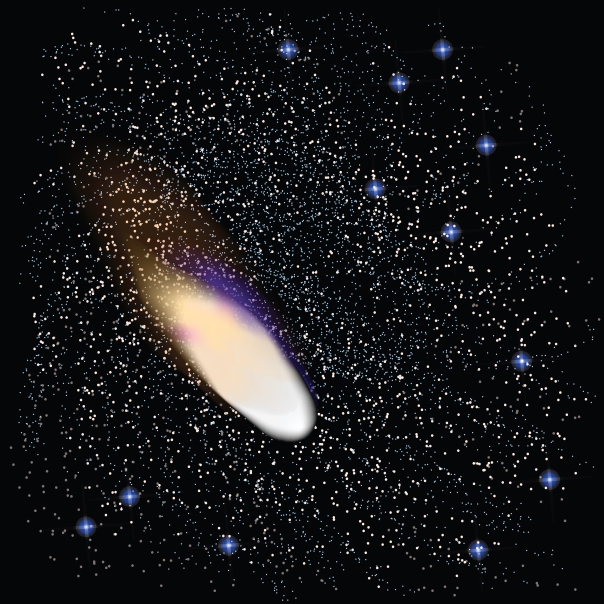 You’ve probably heard of a comet, but do you know exactly what it is?  A comet is a mixture of rock and ice.  It’s absolutely huge and flies through space at stupendous speeds.  The core of a comet can be anywhere from 2 to 150 miles (3.22-241.40 kilometers) wide!

Just like planets, comets revolve around the Sun.  But when they get closer to the Sun, part of the icy core turns into a gas, which in turn forms a glowing serpentine tail, stretching for millions of miles!  Some comets are so bright and beautiful; you can even see them during the day!

Have you ever seen a Halley’s, as in Halley’s Comet?  If you’re old, like me, you’ll remember the last sighting in 1986.   And if you’re young now, you’ll be getting on in years when Halley’s Comet makes its next scheduled appearance in 2061.

The English astronomer Edmond Halley, (1656-1742) first discovered this comet, and it remains the most famous comet of all.  As he researched records of a mysterious light in the sky, he found these sightings occurred in 1531, 1607 and 1682, all exactly 76 years apart.  He predicted it would next make a glowing showing in 1758.  And it did!  Ever since then it’s been known as Halley’s Comet.

The date is 1066.  The event is the battle of Hastings, an event that would change the course of English history.  English astrologers noted the bright light in the sky: Halley’s Comet is as fourth as bright as the moon and four times bigger than Venus.

An omen or a blessing, they pondered?  William the Conqueror thought it a, “Wonderful sign from heaven,” and for him it proved to be true.  He won the battle and the Normans took over England.   Later William commissioned the Bayeux Tapestry – to commemorate his conquest – he made sure to include his blessing from heaven.  Halley’s Comet appears in the top center of this piece of the Tapestry.  Can you spot it?

New Amelia, the Venutons and the Golden Cage:  Book Two

Amelia, the Moochins and the Sapphire Palace:  Book One